Resilience in the face of difficulties and failure is a trait only a few of us possess. But it’s the only thing that sets apart the loser and the winner. The iron-clad will of ‘keep grinding’ allows a person to overcome even the greatest life challenges. Ray Curtis Petty Jr. is one such name. A student whose life is full of challenges has proved once again that perseverance pays big. After years of hardship, he finally graduated from Western Michigan University’s Thomas M. Cooley Law School. It was his second attempt at the Bar exam and he cleared it. He shares moments of joy over the internet. In a post on Instagram, he detailed the struggle he had undergone, till the moment he had been waiting for so long when he cleared the bar exam. 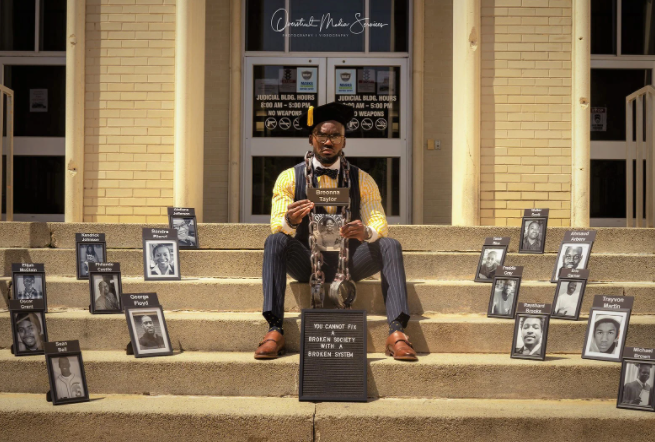 Detailing the struggle, he stated, his teachers used to undermine him and suggested that he attend special education classes. Similarly, his sports coach too were all skeptical about him and used to taunt him by saying he is not smart enough. He enrolled at Albany State University and became a proud alumnus while grinding continues to fulfill his dream of becoming a lawyer. In his pursuit, he was denied admission from everywhere he applied except Western Michigan University Thomas M. Cooley Law School. He took the opportunity and slowly began to move towards his dream. While in Thomas M. Cooley Law School, he distinguished himself as a hard-working and dedicated student and became the president of the Student Bar Association. Soon he was offered a position of paralegal with the United States Air Force Reserves and he took it. In a statement given to WALB News, Ray Curtis Petty Jr said, “I’ve been a paralegal in the Air Force for six years at the McDill Air Force Base in Tampa, Florida.

After those orders, I had to start studying for the bar exam, and that took me into 2021. Got my results back, ended up failing the bar exam the first time, and had to start studying again.” Preparing for the bar exam wasn’t a smooth ride either. He has to ba**le with depression, face the tragedy of his sister dying from sickle cell anemia, all while taking five classes for the exam. But he overcame all, he put a firm stand in front of difficulties and it paid off. In his second attempt, he cleared the bar exam. He now proudly boasts of being the first attorney in his family, although his struggles and his success would surely inspire many to follow and fulfill their dreams.