Pope Francis’ official Instagram account appears to have ‘liked’ a second model’s picture.An image circulating on social media appears to show the account has like a picture of Margot Foxx dressed in a ti-ght, black swimsu-it. 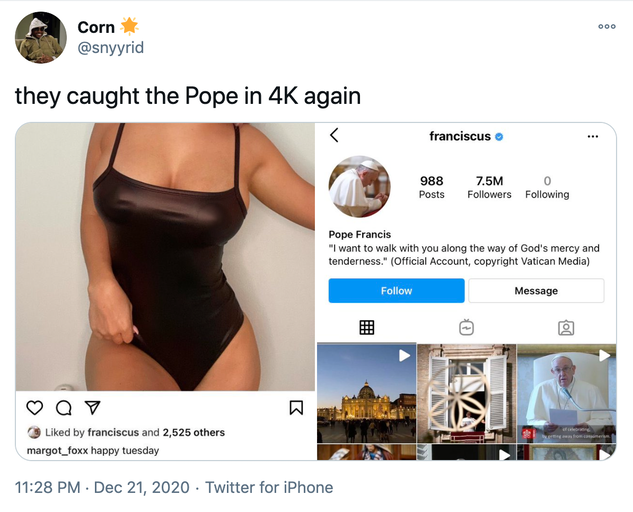 The self-described ‘t!ddy queen’ and OnlyF*ns model has responded to the holier than a holy endorsement of her content, saying: “hey that’s me.” 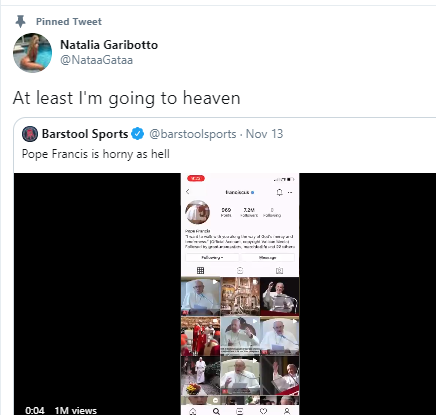 Although this could just be a fancy Photoshop trick, it does appear to have happened before. Brazilian model Natalia Garibotto cla!med the leader of the Catholic Church had taken a shine to a snap of her wearing a very tiny schoolgirl outfit.

She later posted a short video to her account appearing to show the like on her picture from the Pope’s account.Joking about it on Twitter, she said: “At least I’m going to heaven.” It appears as though the video has since been removed by Garibotto – perhaps at the request of the Vatican? Speaking to Barstool Sports at the time, she said: “My mum may ha-te my ass pics but the Pope be double-tapping.”

The post was quickly unliked and the official press office for the Holy See released this vague response.”We can exclude that the ‘like’ came from the Holy See, and it has turned to Instagram for explanations,” A Vatican spokesperson said. Ah yes, it’s Instagram’s fa-ult for the acc!dental like. According to the Catholic News Agency, the Pope’s social media channels are controlled by a team of employees and an internal investigation has been launched into the matter.